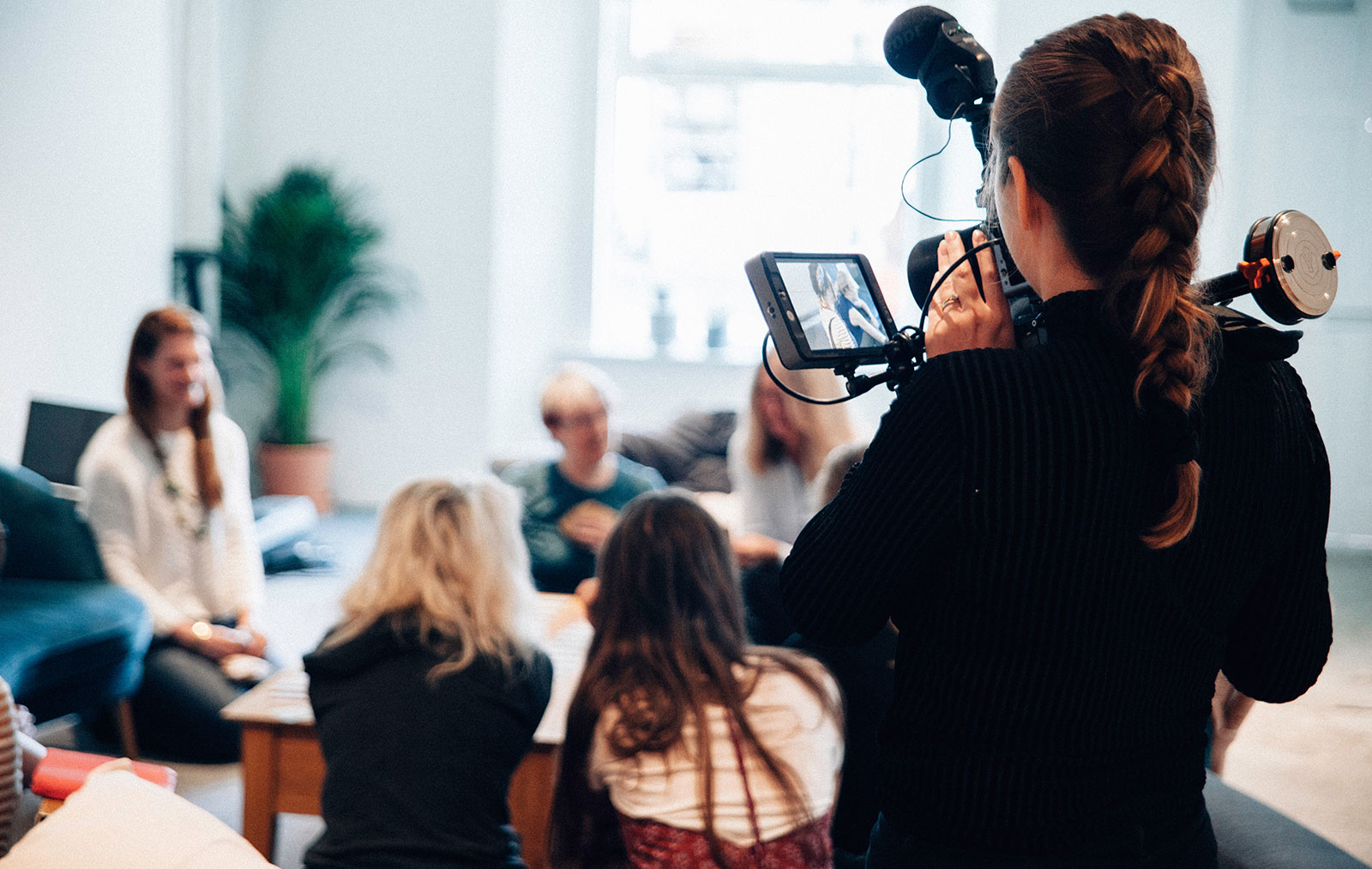 A pathway to market, educate and engage a future workforce for British racing.

Racing has an incredible pathway for those wishing to ride, be it professionally or working on a yard. However, there is currently no equivalent pathway into our sport for anyone wishing to work in racing but not ride, or indeed for those who start on the rider apprenticeship and decide the riding element isn’t for them. There are a multitude of fantastic jobs we can offer without having to ride. This project aims to develop and launch apprenticeships most needed by the industry, giving these young people opportunities, deliver a better recruitment R.O.I, lower the industry churn rate of employees and help employers talent pool across a wide variety of businesses in the sector. 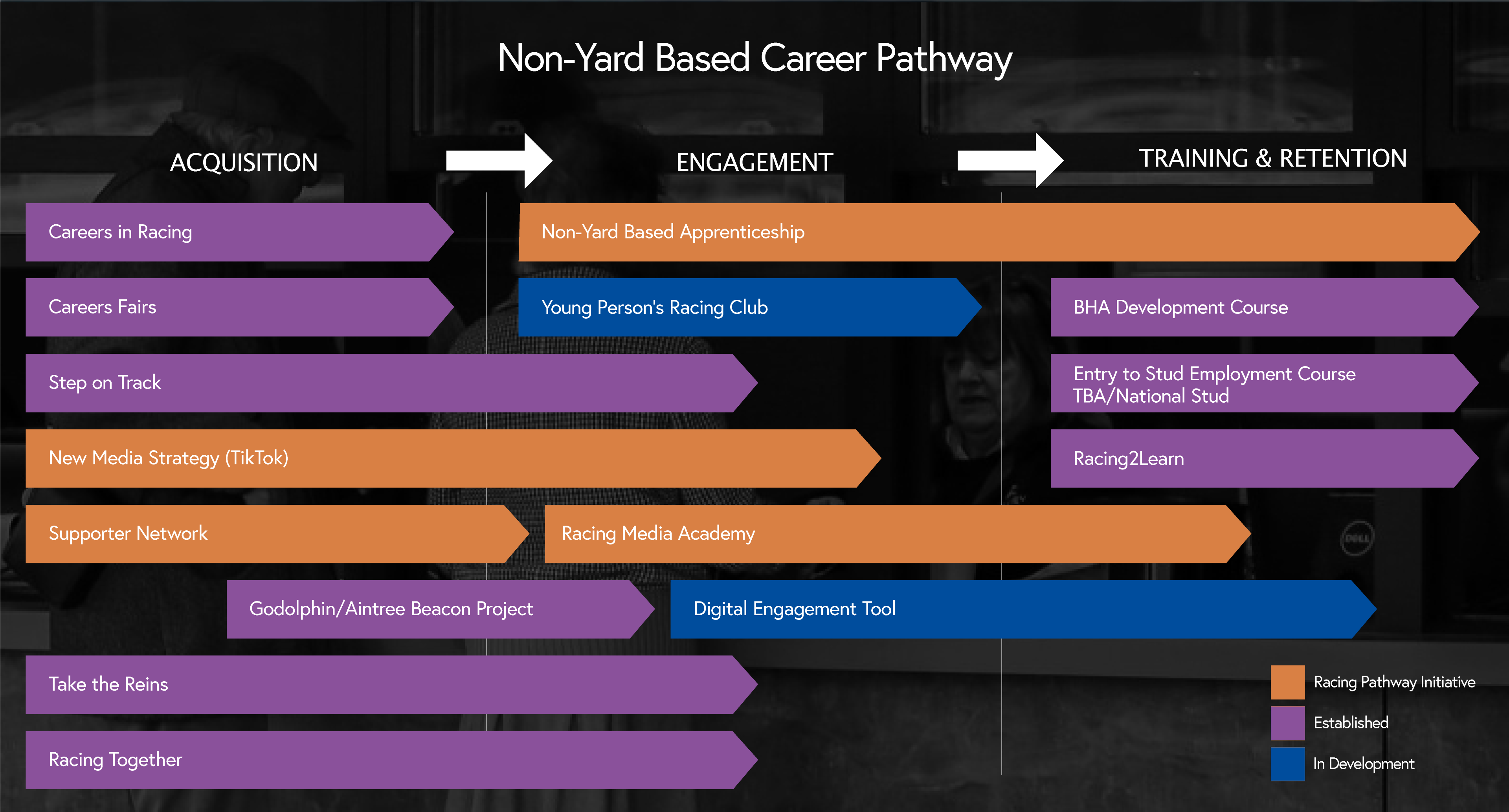 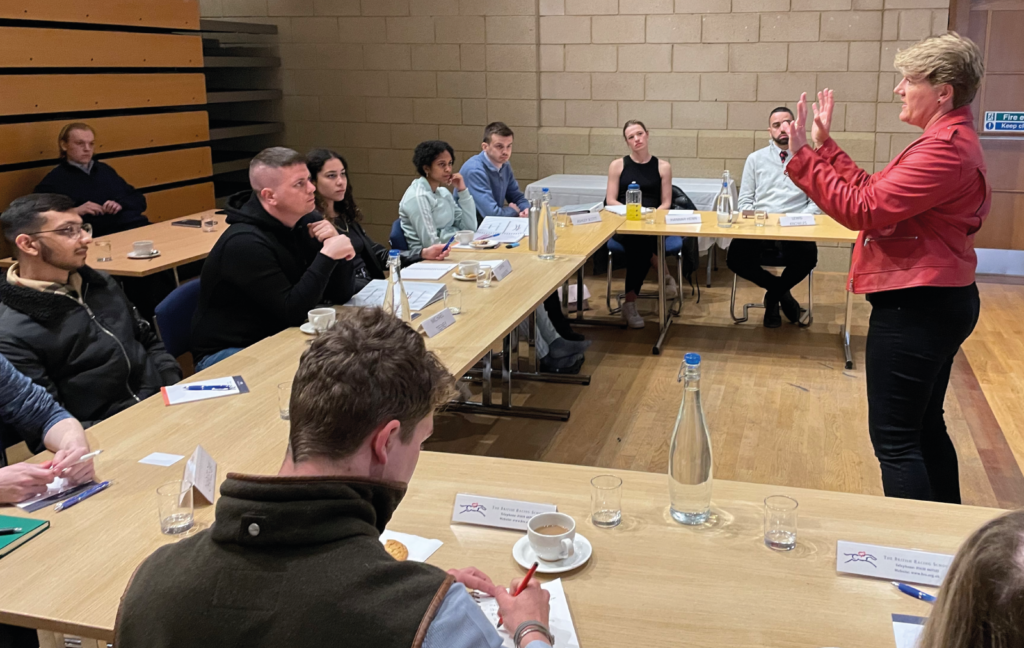 The Racing Media Academy was devised after broadcaster and entrepreneur Josh Apiafi, identified there was a barrier to getting new diverse talent into the horse racing media.
Following an interview on Sky in January 2021 where Josh called for wider diversity in UK horse racing, he was able to bring together racing’s leading media organisations to look at the feasibility of creating racing’s first-ever free Media Academy.

Josh, along with his team of associates, worked hard to build the concept and gather support, before applying for a grant to help launch the project, from the Racing Foundation. In October 2021 funding was granted to create a ‘pilot’ for The Racing Media Academy; to be held at The British Racing School in April 2022.

The Racing Media Academy is part of the Non-Yard Based Career Pathway into horse racing; for those people who love the idea of working in racing but don’t necessarily want or can’t ride horses. The Racing Media Academy gives its students the opportunity for work experience and training within racing’s top media houses. An intensive week’s training was designed at The British Racing School, where students got an insight into the world of horse racing and learned about the different areas of the media. This meant that even those who didn’t know very much about horse racing could still apply.

The ambition is to increase diversity across racing’s media by creating a pathway for talent that is reflective of today’s society. The pilot has gained the support of several organisations that work with young people, from a variety of different backgrounds. This was a strategic plan to help spread the message about the academy and open the opportunity up to everyone, no matter what background, religion, race, culture, sexuality, or disability. These supporting organisations can all be found on our supporter’s page.

The Racing Media Academy is accessible to anyone over the age of 18 and is entirely free, with a paid placement. These placements take place at the following media organisations within the sport; Equine Productions, ITV Racing, Racetech, Racing Post, RacingTV, Sky Sports Racing, and JSC Comms. To broaden the diversity of its participants, Apiafi Associates has built up a network of organisations who support people in under-represented communities, these supporters have helped promote the Racing Media Academy to their groups.

The inaugural Racing Media Academy took place in April 2022, when 10 students had a week-long intensive training programme at The British Racing School in Newmarket. During the week the students got to experience journalism, camera work, social media, and commentating with seminars from industry greats such as Clare Balding, Alice Plunkett, Rishi Persad, Lee Mottershead, Lydia Hislop, Dave James, Stephanie Jones, and Mike Cattermole. The week was supported by other organisations with visits to Sky Studios, Dalham Hall Stud, The Jockey Club Rooms, the National Horse Racing Museum, and Newmarket Racecourses all of which would not have been possible without the support of the Racing Foundation.

Please click here to see what the students said about their time on the course.

We are now working on the launch of the 2023 Racing Media Academy.  Applications are due to open in October 2022.

The long-term plan for this project is to deliver a wider apprenticeship program that will give young people more entry-level job opportunities, deliver a better recruitment return on investment for employers, lower staff turnover levels and broaden the talent pool for racing’s employers.

The Racing Foundation commissioned a survey across the industry to determine the best way to help shape future employment pathways in roles such as business management, marketing, human resources, and sports turf management for young people interested in working in racing. The results of the survey showed that there was an appetite to scale up apprentices in the sport in non-yard-based roles, there was also limited knowledge of the levy share scheme amongst businesses in the industry. 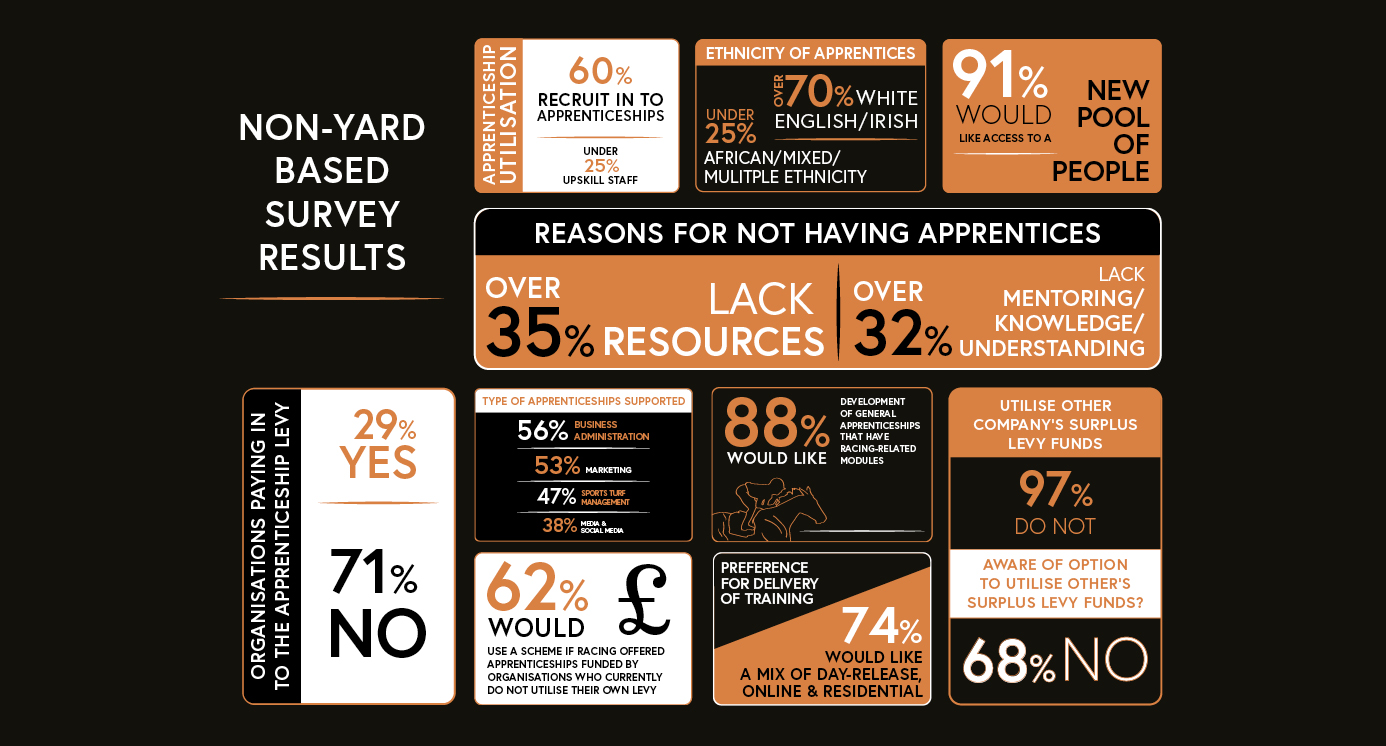 In addition to offering a vital pathway into the world of work for young people, apprentices can also help organisations achieve their strategic goals. Apprenticeship schemes are particularly good for getting the best and brightest young talent into the workforce, which is vital for succession planning. It is great to see that while workforce planning, more and more employers are starting to turn to apprentices to provide the skills that they need in the present, as well as five to ten years down the line.
Organisations are also increasingly recognising the value of using high-level apprenticeship schemes to upskill their existing staff; 44% of apprenticeships started in 2018/19 were at an advanced level 3. This is a great way for employers to invest in their people and retain their services, demonstrating the valuable role apprenticeships can play in developing staff at all stages of their career, as well as those entering the world of work for the first time.

Following the results of the research, Apiafi Associates were funded by the Racing Foundation to bring a pilot Non-Yard Based Apprenticeship to fruition. Apiafi Associates instigated discussions with training providers, to determine who had the experience and desire to help us achieve the first Non-Yard Based Apprenticeship for the sport.  Following a consultation process, Haddon Training was identified as the best partner to launch the first apprenticeship. Working with Gill Greaves and Zoe Elliott at the BHA, the team established an industry-wide HR network to look at the training provision which would include a bolt-on of racing-related topics. This enabled Haddon to quickly develop the first Business Administration for Horse Racing apprenticeship.

On 9th June 2022 the apprenticeship was launched via the BHA, to racing employers. More information on how employers can sign up to have an apprentice can be found here.

If you would like to do an apprenticeship these will be advertised on the Careers in Racing website. More information on them can be found here

Apiafi Associates and Haddon Training will work to get employers to sign up to have Business Administration for the Horseracing Industry apprentices to start the first cohort in September.

Careers in Racing and the supporters of Apiafi Associates will promote these opportunities to young people interested in a career in the sport.

We send occasional update emails to our subscribers. Sign up below to be in the loop.

Racing Pathway is a project, partially funded by the Racing Foundation, to develop three defined collaborative pathways into our sport. Promoted across a more diverse audience, we are looking to ensure that racing becomes an option for future fans and also future careers for Generation Z.